Web Link: CL, EXO, BTS: Are You Ready For K-Pop To Be Your New Obsession?

PDF Link: CL, EXO, BTS_ Are You Ready For K-Pop To Be Your New Obsession_ _ HuffPost Canada

The PyeongChang Winter Games closing ceremony Sunday was a feast for the senses: ultra-modern light effects, traditional music, cascading fireworks, the parade of athletes, the requisite speeches — and K-pop.

If you’re not already obsessed with Korean pop music, but loved the performances by CL and EXO, you’re in luck, because the time is now to start your love affair (If you do already love K-pop, keep reading for the gifs and clips!).

The genre has been around since the 1990s, but has exploded in the past decade, according to Vox, and there are many, many boy bands and girl groups waiting for your adoration. K-pop has become a worldwide phenomenon, with Olympians Chloe Kim and Evgenia Medvedeva counting themselves as fans, according to Billboard.

CL, who performed first during the ceremony, is a 27-year-old K-pop star who was formerly a member of girl group 2NE1, but later went on to have a successful solo career. She performed her solo hits, “The Baddest Female” and “Hello Bitches,” as well as 2NE1’s 2011 hit “I Am The Best.”

Later on, EXO took to the stage. EXO is a boy band and its lead member, Kai, kicked off the performance with a traditional dance. Then the other members joined Kai in the arena, arriving on stage in separate vehicles. Dressed in white, they got into formation and treated the audience to some trademark K-pop choreography and performances of their hits, “Growl” and “Power.”

Notably absent from the closing ceremony was one of the reigning bands in K-pop right now: BTS. The seven-member boy band, also known as the Bangtan Boys, have made their mark in the North American music scene, and are stealing young fans’ hearts, one hit at a time. They’ve been named in Time Magazine’s “The 25 Most Influential People On The Internet” list, spent 52 non-consecutive weeks at No. 1 on Billboard’s “Social 50” chart, and secured a No. 1 spot on the U.S. iTunes Top Albums chart for their latest album, “Love Yourself.”

But BTS, CL and EXO are just a few of the stars in this universe. Groups such as Girls’ Generation and Blackpink are making their mark thanks to their slick music videos and catchy tunes.

Here are a few reasons why the world can’t get enough of K-pop. Ready to start your new obsession?

Whether it’s choreographed by Lee Ju-sun, who created the iconic horse-riding “Gangnam Style” dance; Keone Madrid, who choreographed BTS’s “Dope,” “Fire,” and “Not Today,” music videos; or Parris Goebel, who choreographed for CL, of 2NE1’s single “Hello B**ches,” you can bet the steps will leave you breathless — especially if you try to dance along.

K-pop stars are known for their synchronized and intricate steps — whether it’s BTS’s choreography for “Dope,” or EXO’s “Wolf” music video that features a rather impressive shadow effect in the opening, made entirely of the members of the band, choreography is nothing short of incredible in K-pop.

Almost like a new generation of NSYNC, K-pop welcomes more structured moves with a striking charm.

They know how to put on a show

Let’s talk about the showstoppers K-pop artists bring to the table, from CL’s performance at the 2015 Mnet Asian Music Awards (MAMA) to Psy’s performance that same year at the SBS Gayodaejun. From bright lights to the dazzling outfits, it’s glitz and glam and everything in between at a K-pop artist’s performance and fans love every minute of it.

Their rhythms are universal and transcend language barriers

With their pop/EDM/trap/rap-infused single, “DNA,” BTS showed fans their rhythm. “The song balances powerful EDM elements and softer harmonies, with the auto-tune laden chorus and pulsating raps leading into melodic verses that allow the group’s vocalists a chance to showcase the softer meaning of the lyrics,” Billboard wrote of “DNA” last year.

Even if you don’t understand Korean, BTS’ infectious music will probably be stuck in your head for hours.

K-pop music videos, from artists such as EXO to NCT, are visually and aesthetically pleasing with refreshing uses of colours, effects, and yes, choreography. Whether it’s using vibrant colours like in NCT’s “The 7th Sense” music video, or slow panning camera effects, the viewer is treated to a unique viewing experience.

These are two initials you need to know. Twenty-three-year-old rapper Kim Namjoon, formerly known as Rap Monster, now RM, has us in a frenzy with his rap verses, persona, and dance skills. His verses on the “Mic Drop” remix were punchy with a rhythmic tone some English-speaking rappers like Iggy Azeala struggle to attain.

RM has the allure of a boy band member combined with the edgy nature of a rapper. It’s a quality of RM that punk-rock band, Fall Out Boy, enlisted for their remix of “Champion,” a song that generated 1.2 millions streams by Dec. 21, Billboard said. It also doesn’t hurt that his smile could save lives.

The moves, the live singing (and rapping), all while maintaining a witty charm can be hard for any artist to do during a live performance, but K-Pop artists have that mastered. Whether it’s a high jump, or leg lift, or a quick crouch, they’ve got them all down, even if they don’t think so themselves. “I wonder when I’ll finally finish learning the dance … I’m still learning the moves for ‘DNA’ … It’s really hard, but it’s an honour to dance to it,” RM said to V Live. He certainly could have fooled us.

In the above video, one Youtuber even commented, “This choreography is not easy and it’s very fast, but Jin and RM were dancing with such energy and skill! … I think they’re all brilliant dancers…” We could not agree more.

They keep it funny and charming off the clock, too 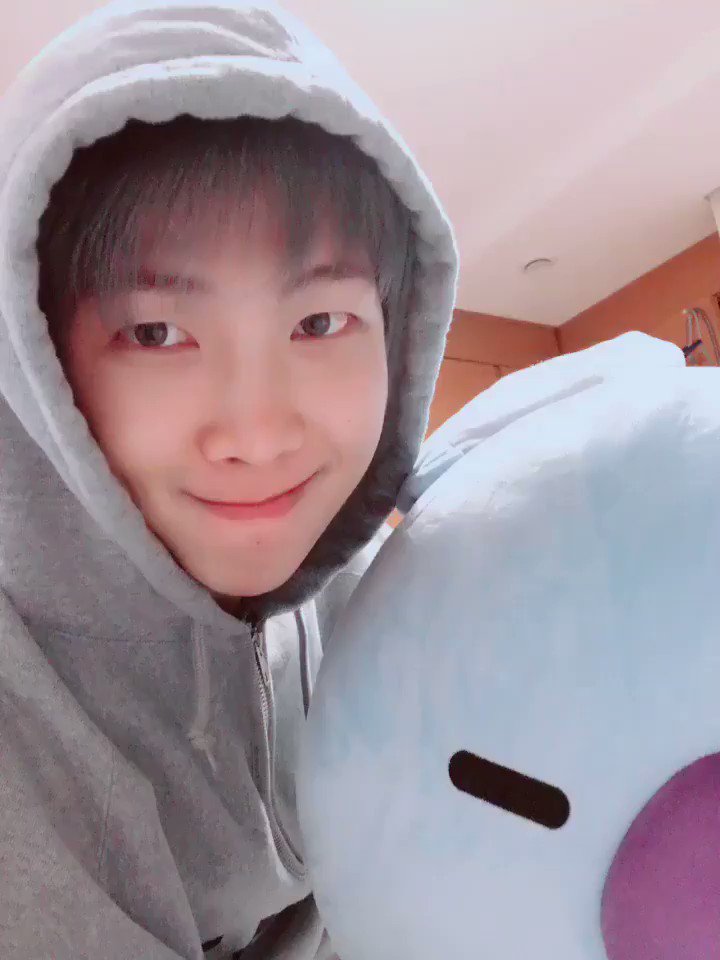 Whether it’s Twitter or Instagram, K-Pop artists like BTS have a certain niche for being adorable, funny, and charming, offering a personal perspective for their fans. In the video above, BTS member RM plays around with a cuddly toy, flashing his winning smile. Fans love to get a behind-the-scenes view into celeb life and BTS always delivers, with their Twitter feed being almost entirely selfies and not many promotional tweets. BTS poses in photos with emojis across their faces and many more cute moments.

Did We Mention RM?